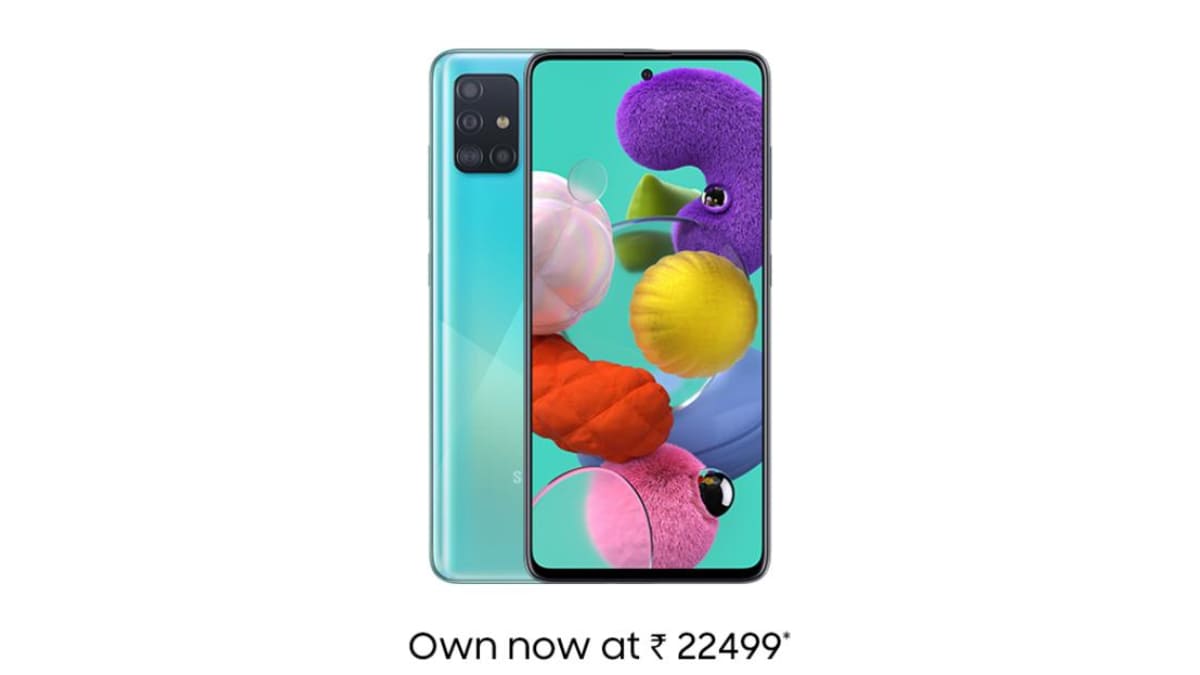 Samsung Galaxy A51 has received a price cut in India. The 6GB RAM option that saw an increase in April due to the GST rate hike from 12 percent to 18 percent, is now listed at its original price point. Furthermore, the 8GB RAM option is listed with a price cut of Rs. 2,000 as well. Apart from this, Samsung is also running an offer wherein it is offering a further Rs. 1,500 cashback to HSBC and SBI credit card holders, enabling them to buy the device at an effective low price starting at Rs. 22,499.

The 8GB RAM option of the Samsung Galaxy A51 was launched much later in May for a price of Rs. 27,999 in India. This model is now listed for Rs. 25,999, which means a price cut of Rs. 2,000 has been introduced here as well. The new prices are live on leading e-commerce portals and the Samsung India e-Store as well. We have reached out to Samsung for a clarification on this, and will update this copy when we hear back.

In addition to this price cut, Samsung has also introduced a cashback offer on its own e-store. All those who own a HSBC or SBI credit card are entitled to a Rs. 1,500 cashback on the purchase of the phone. This offer is valid only till August 15, the company says in its tweet that announces the offer. Samsung says that this promotional offer has been introduced after the device was announced as the world’s number one Android smartphone in Q1 2020 by Strategy Analytics. The Samsung India e-store also lists no-cost EMI options starting at Rs. 1,999 per month and exchange discounts. The Samsung Galaxy A51 is offered in four colour options — Prism Crush Black, Prism Crush White, Haze Crush Silver, and Prism Crush Blue.

Samsung Galaxy A51 specifications and features

As for specifications, the dual-SIM (Nano) Samsung Galaxy A51 features a 6.5-inch full-HD+ (1080×2400 pixels) Super AMOLED Infinity-O display with 20:9 aspect ratio and in-display fingerprint sensor. The smartphone is powered by the octa-core Exynos 9611 SoC coupled with up to 8GB RAM and 128GB storage. Storage is further expandable via a microSD card to up to 512GB.

As for the cameras, the Galaxy A51 features a quad-camera setup at the back which includes a 48-megapixel primary sensor, a 12-megapixel ultra-wide-angle camera, a 5-megapixel macro camera, and a 5-megapixel depth sensor. For selfies, the smartphone has a 32-megapixel camera at the front.

Battery capacity of the Samsung Galaxy A51 has been set at 4,000mAh that supports 15W fast charging. Connectivity options include 4G VoLTE, Wi-Fi, Bluetooth, GPS/ A-GPS, and USB Type-C port.