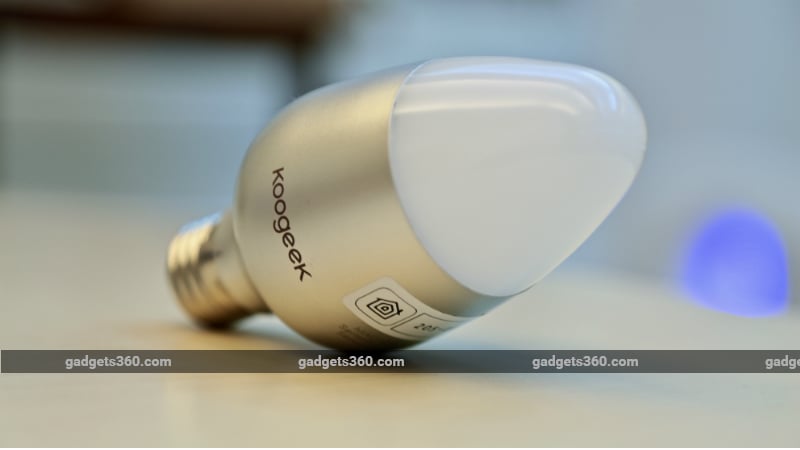 China’s Koogeek is one of the lesser known names when it comes to IoT-based smart home gadgets. Alphanzo Inc, a New Delhi-based national distributor, has been appointed to sell Koogeek’s products in the Indian market. Its catalogue for India includes a wide range of smart home gadgets including an LED bulb, an RGB light switch, a padlock, a door sensor, an E27 bulb socket adapter, and some IoT-enabled switches.

Most of Koogeek’s range of products is certified by Apple and compatible with the HomeKit SDK, including the two products we are testing today. The Koogeek Wi-Fi-enabled LB1 smart bulb is priced at Rs. 2,950 and the Wi-Fi-enabled LS1 smart light strip has a tag of Rs. 3,363 in India. One of the highlights of Koogeek’s range is that it does not require a central hub to be operated, for an additional level of convenience.

The Koogeek LB1 is an 8 Watt LED light bulb that works like any other but offers smart control features. To get it running, you just need to plug it into an EU-standard 200-230V screw-type E27 bulb socket (the kind where you have to twist the bulb a few times to get it into its place) which the majority of households may not have. If you have a ‘regular’ socket, you can buy a converter online or offline for a small amount. Once the bulb has been switched on, open the Koogeek Home app on your iOS device and scan the code on the pamphlet in the box or on the device itself.

The LB1 comes with support for Siri and Apple’s HomeKit, but according to Koogeek, it will support Google Assistant and Amazon’s Alexa assistant in the future. The company also says the bulb isn’t suitable for use outdoors, and certain enclosures or shades might obstruct its Wi-Fi reception.

The Koogeek LB1’s build quality is impressive, and is comparable to that of the Philips Hue E27 smart bulb. It fits into suitable sockets quite easily and can be removed with equal ease. It is designed to not heat up much, but we found that the LB1’s exterior got considerably warm after about 20-30 minutes of continuous use.

The bulb has a rated lifetime of 25,000 hours, which means that if it is used for about 8 hours a day, it should be able to last for more than 8 years – well that’s what the claim is and we obviously haven’t verified that.

Koogeek says this 8W LED bulb is equivalent to a 60W incandescent bulb. Disappointingly, though, the LB1 has a rated luminous flux of only 500 lumens. For comparison, the Philips Hue is rated at 800 lumens. The colour temperature ranges from 2,700K to 6,000K, which is fine.

The 2m long LS1 light strip has a total of 60 LEDs, placed equidistant to each other. It complements the LB1 LED bulb with a similar maximum luminous flux rating of 500 lumens. In addition to being controlled through the Koogeek iOS app and Apple’s Home app/ Siri, the light strip does support Google Home and Alexa, according to Koogeek’s website.

On one end, it has a controller with a USB plug for power and a button that you can use to turn it on or off. It will work with any USB power adapter capable of delivering at least 5V/2A. The back of the strip is adhesive, so you can stick it to your furniture or any surface after peeling off the protective paper.

There are markings where you can safely cut it with a pair of scissors, but you can’t daisy-chain multiple strips. The LS1 light strip has an IP65 rating for water resistance but Koogeek says it isn’t advisable to use it in a bathroom. We also found that it heated up slightly after more than an hour of continuous usage.