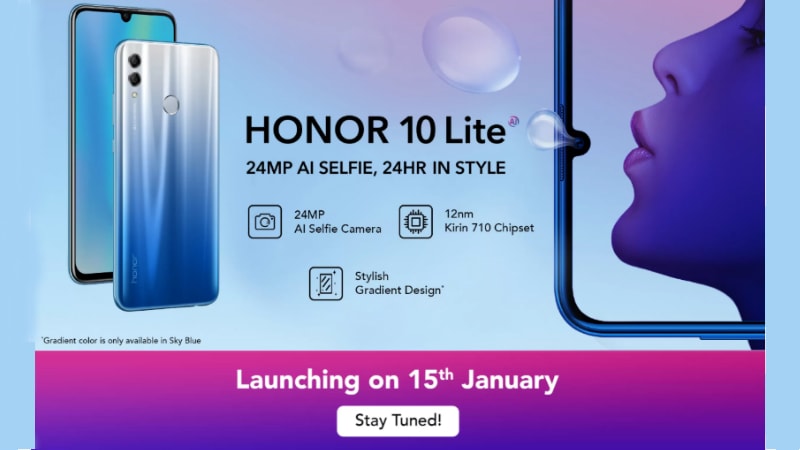 Honor 10 Lite is all set to launch in India on January 15. The smartphone was originally teased for a January 8 unveiling, but the company has since confirmed a launch in India next week, thanks to a Flipkart teaser. The smartphone was launched in China in November, and thus its specifications are known, so can its approximate India price be estimated. Its key features include a HiSilicon Kirin 710 SoC, 24-megapixel camera, and a gradient back panel.

You can check out our first impressions of the Honor 10 Lite. As we mentioned, a Flipkart page teases the arrival of the smartphone, also tipping that it will be exclusive to the e-commerce platform. Based on the Flipkart listing, the Honor 10 Lite may launch in India in three colour options – Gradient Blue, Valley White, and Magic Night Black.

Optics includes a dual camera setup  2-megapixel secondary sensor. At the front, there is a 24-megapixel camera with f/2.0 aperture. It packs a 3,400mAh battery, and connectivity options in the Honor 10 Lite include dual 4G VoLTE, Wi-Fi 802.11 a/b/g/n/ac, Bluetooth 4.2 LE, 3.5mm audio jack, GPS/ A-GPS, and GLONASS. Sensors on board the handset include accelerometer, ambient light sensor, compass, gyroscope, and a proximity sensor. In terms of dimensions, it measures 154.8×73.64×7.95mm and weighs 162 grams.

The Honor 10 Lite is seen to sport a waterdrop-shaped notch, a vertically stacked dual rear camera setup, a rear fingerprint sensor, and a gradient back panel. The power and the volume buttons are housed on the right edge of the phone.