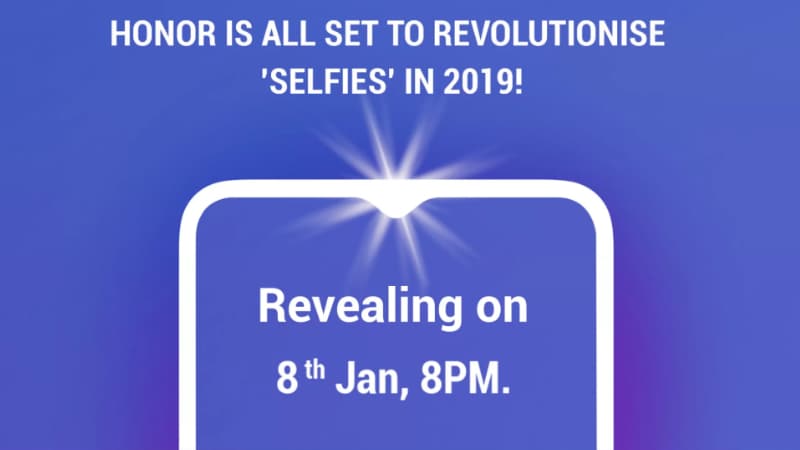 Honor has started teasing the arrival of a smartphone on January 8, i.e., tomorrow in India. The company hasn’t specifically mentioned the name of the phone, but claims that it will redefine selfies in 2019. The teaser has been posted on e-commerce site Flipkart, and this suggests that the device will be exclusively available online on the website. The company is largely expected to launch the Honor 10 Lite smartphone in India, as the teaser reveals that the smartphone will sport a waterdrop-shaped notch.

Flipkart has dedicated a page for teasing the arrival of the Honor 10 Lite in India, and it is set to launch as soon as tomorrow, i.e., January 8. The launch is set for 8pm IST in India, and the teaser states that the smartphone will redefine selfies in 2019. To recall, the Honor 10 Lite sports a 24-megapixel selfie camera with f/2.0 aperture.

It was launched in China in November last year, and the price starts at CNY 1,399 (roughly Rs. 14,400) for the 4GB RAM/ 64GB inbuilt storage variant. The 6GB RAM/ 64GB storage model of the handset costs CNY 1,699 (roughly Rs. 17,500) and the 6GB RAM/ 128GB storage variant has been priced at CNY 1,899 (roughly Rs. 19,500). We can expect the India pricing to be around the same range as the China pricing. In China, the smartphone was made available in four colour variants – Gradient Blue, Gradient Red, Lily Valley White, and Magic Night Black.

Because it has been launched in China first, the hardware and design details are known already. As mentioned, the Honor 10 Lite sports a waterdrop-shaped notch, a vertically stacked dual rear camera setup, a rear fingerprint sensor, and a gradient back panel. The power and the volume buttons are housed on the right edge of the phone.

In terms of optics, the Honor 10 Lite features a dual camera setup with a 13-megapixel primary sensor with f/1.8 aperture and a 2-megapixel secondary sensor. At the front, there is a 24-megapixel camera with f/2.0 aperture. Also, the smartphone comes with 64GB and 128GB inbuilt storage options, both of which are expandable via microSD card (up to 512GB).