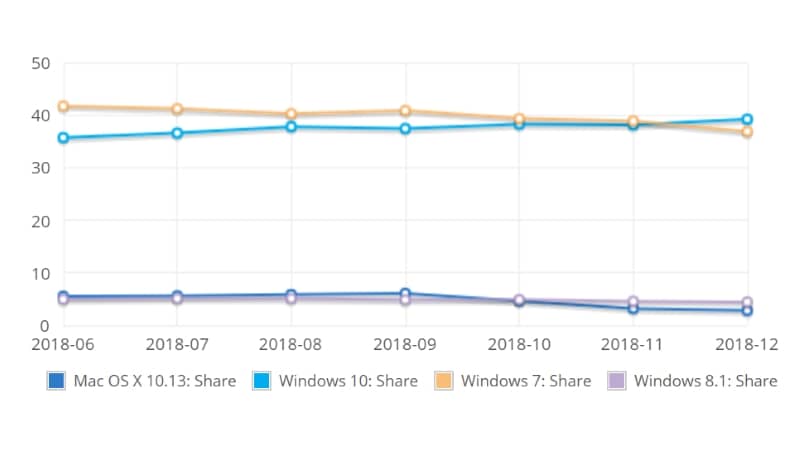 Windows 10 has finally overtaken Windows 7 in terms of market share, according to Net Applications. As of December 2018, 39.22 percent of Web traffic monitored by the company was coming from Windows 10 users, while Windows 7 had fallen to 36.9 percent. As of November, those figures were 38.14 percent and 38.89 percent respectively. Meanwhile, Windows 8.1 is currently at a 4.41 percent and Windows XP still holds on to 4.45 percent of the market share. Windows 8 is at 1.3 percent, and Windows Vista is at 0.45 percent.

All versions of Windows combined made up 86.2 percent of all operating systems in use, which has not varied much over the past year. Windows started the year with an 87.79 percent share. MacOS was reported at 9.95 percent in January 2018, and ended the year at 10.65 percent. Linux had 2.09 percent and ChromeOS came in at 0.31 percent. The statistics do not break up individual versions of Windows 10, of which there have been seven major releases so far including the problematic October 2018 Update.

These figures apply only to desktop (including laptop) operating systems. Net Applications reports mobiles and tablet OS market share separately. When combined, Android (all versions) stands at 39.18 percent with Windows coming in at 37.21 percent and iOS at 16.65 percent. Windows and Android have gone back and forth between the top two spots a few times over the course of 2018 beginning in June, when Windows fell below Android for the first time ever.

VentureBeat points out that Net Applications is far from the only analytics source available. According to StatCounter, which measures market share by page hits rather than unique visitors, Windows 10 overtook Windows 7 in January 2018, with a 42.78 percent usage share as opposed to at 41.86 percent. As of now, the figures stand at 52.36 percent and 35.63 percent respectively.

StatCounter also provides breakups by region. In India, Windows 7 is still ahead as of December 2018, with a 48.67 percent usage share while Windows 10 comes in at 38.85 percent. Windows 8.1 is at 8.44 percent, while Windows XP is now down to 1.85 percent and Windows Vista is surprisingly still showing up with a 0.11 percent usage share. When considering data across all platforms, Android has a massive lead over Windows in India, at 70.22 percent compared to 17.74 percent, which just goes to show the scale of smartphone penetration in India.