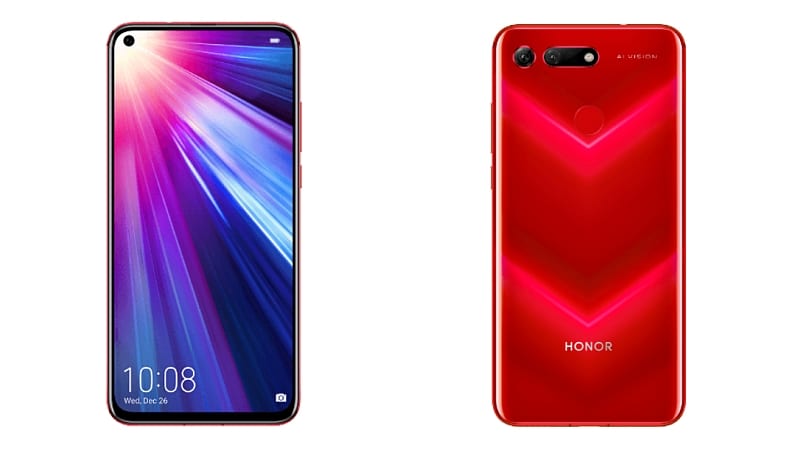 Honor V20 aka Honor View 20 was launched in China on Wednesday, after much hype created by the Huawei sub-brand. Honor revealed all details about the smartphone, including price and availability details. It takes on Samsung’s Galaxy A8s, which is arguably the first phone launched with a display hole for selfie camera. The Honor V20 comes with a ‘hole-punch’ selfie camera design, similar to that of the Huawei Nova 4, apart from a dual rear camera setup at the back. Key highlights of the phone include a 48-megapixel Sony IMX586 rear sensor, HiSilicon Kirin 980 SoC, a 25-megapixel selfie snapper, 4,000mAh battery, and Link Turbo technology. The Honor V20 will launch globally as the Honor View 20, with the first launch confirmed to take place in Paris on January 22.

Honor V20 price starts at CNY 2,999 (roughly Rs. 30,400) for the 6GB RAM + 128GB storage options and goes up to CNY 3,499 (roughly Rs. 35,500) for the 8GB RAM + 128GB storage option. It is available in Charm Blue, Red, and Midnight Black colour option. Pre-orders of the smartphone has already begun on Tmall, Vmall, Jingdong, Sunning.com, and more options, with shipping beginning from December 28. Honor has also launched Moschino Edition of the device priced at CNY 3,999 (roughly Rs. 40,600) and this variant comes with 8GB RAM + 256GB storage configuration. This edition device comes only in Red and Blue colour options, and its first sale will be conducted on December 28 itself.

Honor V20 is seen to sport a ‘hole-punch’ selfie camera design with the sensor placed on the top left edge of the smartphone. The cutout is just 4.5mm in size, and is very non-invasive, the company claims. At the back, the smartphone sports a dual rear camera setup aligned horizontally and a rear fingerprint sensor as well. The back panel is seen to sport a glossy gradient finish and tapered edges for better gripping. Notably, the smartphone will be launched globally as the Honor View 20 on January 22. We can expect the Honor View 20 price and specifications to be very similar to the Honor V20’s.

Coming to optics, the Honor V20 sports a 48-megapixel Sony IMX586 sensor with f/1.8 aperture, 960fps slow-motion video recording support, autofocus, AI HDR, and LED flash support. There’s a secondary 3D Time of Flight (ToF) sensor to capture the depth of an image, and can be used for such features as slimming subjects in photos as well as creating 3D avatars of users. At the front, there is a 25-megapixel front sensor with f/2.0 aperture and fixed focus support. Camera features include AI photo, night scene, portrait, fun AR, time-lapse photography, slow-motion, and more. It also ships with the Yoyo virtual assistant.

The Honor V20 smartphone packs a 4,000mAh battery with support for fast charging as well (4.5V/5A). Confirmed earlier, the Honor V20 comes with Link Turbo technology that allows the phone to switch between data and Wi-Fi on its own, in order to keep the browsing unaffected and buffer-free. Connectivity options include Bluetooth v5.0, Wi-Fi 802.11 a/b/g/n/ac (dual band, 2.4GHz and 5GHz), GPS/ A-GPS, USB Type-C, and more. It also supports GPU Turbo 2.0 technology for supporting intense gaming sessions. The company is touting AI-based GPS tech with dual-band technology for more accurate positioning. Sensors on board include accelerometer, ambient light sensor, digital compass, gyroscope, and a proximity sensor.