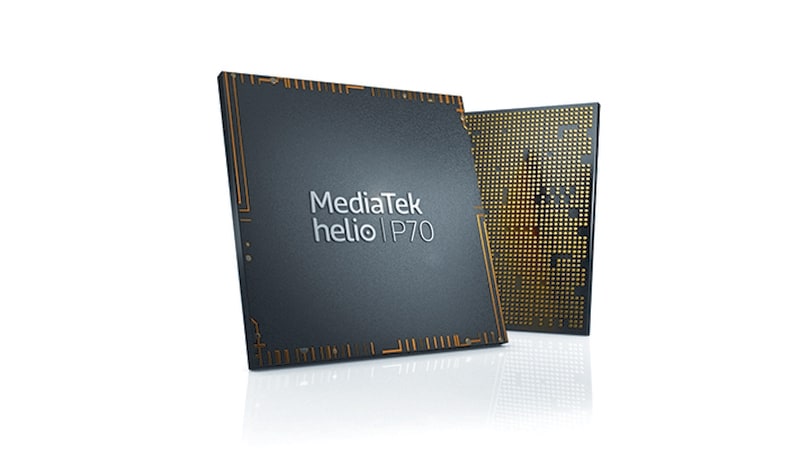 MediaTek on Wednesday announced the launch of the Helio P70 system-on-chip (SoC). The Chinese fabless semiconductor firm said the new SoC features an enhanced AI engine, as well as upgraded imaging and camera support, boosted gaming performance, as well as improved connectivity when compared with previous generations. It is meant to power “full-featured smartphones at affordable price points.” The MediaTek Helio P70 SoC follows the launch of the Helio P60 SoC at MWC 2018 earlier this year, a chip that also featured a dedicated AI engine. The Helio P70 SoC is already in volume production, and will become available to clients by November this year.

The MediaTek Helio P70 is an octa-core SoC that’s been built on TSMC’s 12nm FinFET process. It bears four ARM Cortex-A73 cores clocked at up to 2.1GHz, and four ARM Cortex-A53 cores clocked at up to 2.0GHz. These are arranged in a big.LITTLE configuration, while the SoC also features an ARM Mali-G72 MP3 GPU that’s clocked up to 900MHz. All this, the company says, gives the SoC a 13 percent performance boost over the MediaTek Helio P60 SoC, while the chip has been optimised to reduce frame-rate jitter as well as improve latency for touch controls and display visuals. The Helio P70 SoC with a 4G LTE modem with up to 300Mbps peak download rates, and also supports dual 4G VoLTE. The company is also touting its own smart antenna technology that chooses the best antenna combination for better signal quality.

The Helio P70 SoC comes with a multi-core APU clocked at up to 525MHz for better edge-AI processing. MediaTek says the Helio P70 is based on its NeuroPilot programme, its hardware and software ecosystem that supports AI – in this case, it supports common AI frameworks such as TensorFlow, TF Lite, Caffe, and Caffe2, amongst others. The ‘enhanced AI’ engine on board the Helio P70 is also said to give it a 10 to 30 percent AI processing boost when compared to the Helio P60, and allow it to support more complex AI applications including real-time human pose recognition as well as AI-based video decoding. An AI video encoder on board also helps enhance video quality, and can be used to improve Skype and Facebook video calls, apart from YouTube live streaming, even on low bandwidth connections.