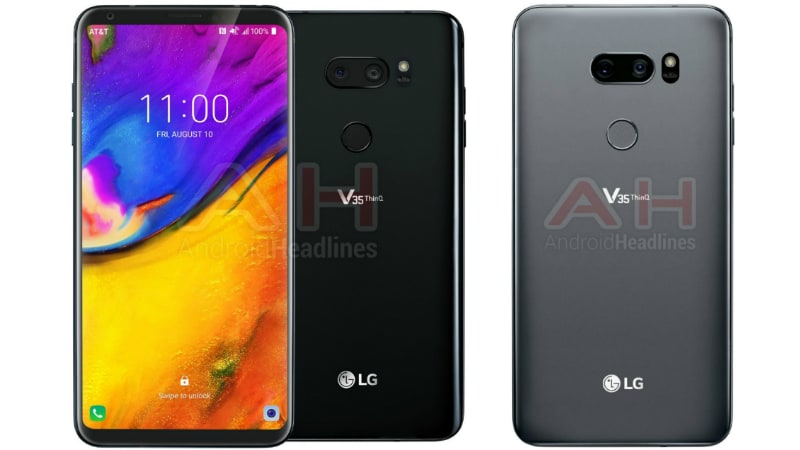 LG G7 ThinQ and LG G7 ThinQ are the company’s latest flagship smartphones launched at events in New York and Seoul earlier this week. We recently learnt that AT&T is not bringing the G7 ThinQ to the US, and it will instead launch an alternative – exclusive to the mobile carrier. With the latest set of revelations, it seems this phone could be the upcoming LG V35 ThinQ which is rumoured to launch around August 10. Additionally, a report suggests LG is reserving OLED displays for the V series and the V35 ThinQ might feature one.

AndroidHeadlines claims to have obtained exclusive design renders of the upcoming LG V35 ThinQ. This leak comes days after prolific tipster Evan Blass had revealed the smartphone’s name and imminent launch in a tweet. As per the renders, the LG V35 will not sport a notch, but will get a display with an 18:9 aspect ratio. The back of the handset is expected to sport a horizontal dual rear camera setup. It is said to be available in Black and Grey colour variants.

The report also says that launch of the LG V35 ThinQ is expected sometime “this summer”, with a launch around August 10. The phone might be an AT&T exclusive in the US, with an LG V40 ThinQ launch rumoured around fall this year.

Separately, AndroidHeadlines has also learnt that LG is planning to reserve OLED panels only on the V series and will retain the LCD panel for its G series of flagship smartphones, as last seen on the LG G7 ThinQ range. While OLED has been reserved for the more premium V series, the G7 ThinQ uses a new and improved LCD panel technology that is capable of producing brightness up to 1,000 nits. In fact, the report states, LG Display is fitting the same panels from its latest LCD TVs, for the G7 ThinQ.

As per previous rumours, the LG V35 ThinQ is expected to sport a 6-inch QHD+ OLED FullVision display with an 80-percent screen-to-body ratio, a dual rear camera setup with two 16-megapixel sensors, AI Camera, Google Lens, and 32-bit Hi-Fi Quad DAC. LG is expected to position the V35 ThinQ as a “super-smart device”.