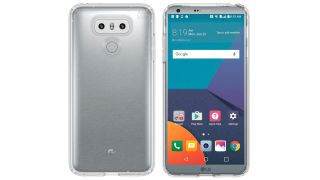 Update: Serial leaker Evan Blass has shared images (above) of the LG G6 and Samsung Galaxy S8, seemingly sourced from a phone case manufacturer. These images reinforce what we expected the G6 to look like, it shows off the thin bezels, 18×9 display, and dual camera.

A press release from LG’s display manufacturing arm says that a 1440 x 2880 resolution display will be used in LG’s flagship phone this year. It will have a whopping 564 pixels per inch compared to the iPhone 7’s 326ppi.

The phone is supposedly going to feature excellent touch responses thanks to LG’s new TOUCH technology that eliminates the need for Touch Cover Glass, meaning the phone can be thinner.

The LG G6 will be unveiled on the 26th February 2017 at 12PM CET – kicking off Mobile World Congress. As you’d expect, T3.com will be there on hand to detail all the big announcements as they happen.

A YouTube video showcases customers detailing what they want to see from their next smartphones, the features: a bigger screen, smaller body and waterproof are some of the notable highlights. The tease seems to highlight that LG has all these boxes checked.

It seems as though the next flagship is going to look visually similar to the Xiaomi Mi Mix, a phone that boasts a 91.3% screen to body ratio.

This is presumably something LG is looking to do with the G6, in order to make a smaller phone that feels good in the hand, but also keeps a 5.7-inch screen size, the bezels of the new flagship are going to be significantly smaller than other phones on the market.

The 18:9 aspect ratio that LG is talking about means the screen is going to be taller than the standard 16:9 displays we’re all used to.

A invitation released from LG confirms the smartphone will have very small bezels. It states, “Big Screen, That Fits”.

Until anything is officially announced, you can watch the teaser for yourself below:

LG said the dual camera setup will feature two 13-megapixel rear-facing snappers as well as a front-facing camera.
The front-facing snapper tops out at an angle of 100-degrees while the back two actually manage a wider 125-degree field of view to stop distortion at the edges of the shot. Crucially these also shoot in a ratio of 1:1, yup that magic ratio that Instagram loves so much.
The dual camera fun doesn’t stop there. LG has also said that you’ll be able to take a photograph with one camera and have it on the screen while you line up the shot from the other camera. This is described as what sounds like an overlay “film on the shooting screen side”.

Other modes mentioned on the site include 360 panorama mode, food mode, match shots, grid shots and snapshots. There will also be an 18:9 mode which should help to maximise the use of the phone’s screen which is of the same ratio. There is also an ability to take multiple photos to create your own GIFs right there from the camera’s gallery.